Growing up Magic Hour-How we raise your puppy

Before birth to two weeks

All about Momma and pups

Before the birth of your special pup I move into my "whelping room" with the mother of the litter.  My mothers whelp pups directly into my hands, never alone.  Each pup is weighed, cleaned, and started nursing right at birth.  Pups and Momma are given as much or as little assistance as needed for each given situation.  Pups are born with eyes and ears sealed shut and just able to scoot around. They cannot regulate their own body heat and can freeze to death if they accidentally scoot away from the warmth of Momma and litter.  I keep a heating pad set on low under blankets in the corner of my whelping box so pups have additional heat if needed. Good momma's don't want to leave their pups in that vulnerable state. So I bring Momma "breakfast in bed" for the first week or two after pups are born, weigh pups daily to monitor for any possible problems, and I've even slept in the whelping box when needed!   Bedding is changed daily, toe nails dremeled within the first few days of birth and any time they feel sharp afterward.  The first two weeks they mostly eat and sleep.   I sleep with the lights on so I'll wake at the slightest noise and be able to assist a pup or Momma.  At the end of the two weeks Momma starts to feel comfortable leaving her pups alone for a few minutes, eyes are open, ears open, and they can sort of stand on all four feet before toppling over.  During this early stage in their development breeders have a window of opportunity to influence the pups for a lifetime. From day three through day sixteen breeders can use five simple tactile procedures that can improve the pups ability to handle stress, improve cardiovascular function, and lead to an adult dog that learns more proficiently.  To read more about biosensor/super dog training click to visit Carmen Battaglia's link: https://breedingbetterdogs.com/article/early-neurological-stimulation

taking over the world-well the room anyway

At two weeks they can see, they can hear, and they can stand.  By four weeks they start using the safety rails of the whelping box as stairs to make an escape.  It's a period of many changes.  They start to potty w/o Momma's assistance, and they begin making the decisions to do so vs simply going when stimulated.  At this time I divide the whelping box into a bedding half, and a puppy pad half so they can choose to use the restroom away from where they sleep.  Toe nails need dremeled more often.  Little faces are getting very fuzzy.  Momma and I both take breaks and venture to the living room for a little one on one so she doesn't forget she's also special.  Pups still mostly sleep and canine and human Momma take advantage of this and get in some naps to make up for all the sleep we've both lost those first two weeks!  During this period they are introduced to their first solid meals.  Kibble soaked in warm water, smashed into a gruel, with probiotic added to aid digestion.  At two and four weeks they are also wormed for the first time using pyrantel pamoate.  The first face shave at four weeks instantly transforms them, they shed the last of their  fuzzy potato resemblance and emerge as true little poodles.  They have their first foray into the great outdoors.  And we all move into the living room from the spare bedroom.

Faces shaved at four weeks, visit to the great outdoors, and a move to an ex-pen in the living room.  Momma still has access to pups as much as she wants but pups have more room to move AND they are now exposed to adult dogs running past them on a daily basis.  They've had short trips to the living room in the previous weeks.  They've heard the tv, the washing machine, the blender.  They've heard the barking of their older relatives.  But now they are exposed to everything 24/7.  Thanks to genetics, biosensor training, and small exposures ahead of time, no one ever seems to really notice or care about the sudden change of venue.  But then everything else changes!  Instead of being carried outside for just a moment or two I begin asking them to follow me to the door.  Pups have teeth and Momma is starting the weaning process.  By six weeks they are eating three times a day, readily following me to the door to go out to potty (but accidents do still happen in transit), and they sleep a good solid six hours through the night.

In two weeks time they go from sleeping in an expen as one big happy litter, to sleeping separated into crates.  At first the litter is split into two crates, then three, four, however many until two or three occupy a crate (prefer just two but some litters involve odd numers).  I place a single crate near the couch and throughout the day one pup will occasionally occupy that crate so he/she begins to understand being crated alone.  They are groomed for the first time at six weeks, second time usually at eight weeks.  They spend more time playing outside in my puppy safe play yard.  They start navigating my front deck steps so we can explore the farm.  We investigate puddles, play in the rain, the water hose, stand under cover and listen to thunderstorms, etc.  We take their first car ride to the vet for first shots and return in two to three weeks for our second set of shots.  We continue every other week worming protocol.  By eight weeks they are usually sleeping through the night in crates, heading out the door to go potty from their crates, and following basic commands.  They are by no means trained individuals at this point but their behavior is being shaped.

Eight weeks and beyond

Preparing for your home

I allow my pups to start leaving for new homes typically at ten weeks.  If my puppy family or myself have a need for slightly earlier, or slightly later, time frame then we work together to decide on the best date.  During their final weeks our time continues much as it has the previous weeks.  They go outside to play and potty, play in the house, watch siblings receive grooming, they are allowed to play with an older well mannered adult dog.  By eight weeks they are eating twice a day, sleeping in crates through the night usually going out to potty one last time around 11 p.m. and sleeping until 5 or 6 a.m.  They are groomed once a week or every other week depending on weather and need.  Toe nails are dremeled regularly.  Worming is every other week.  Vaccinations occur when scheduled.  And this continues until each pup finds their own home.  Pups who are chosen as my show picks stay and continue the routine for years to come, some for their entire lives.  Some of my retirees will eventually become available to retirement homes.  Some will never leave Magic Hour. 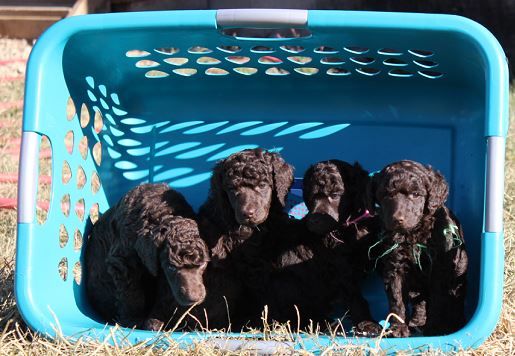